Job vacancies rebound to pre-lockdown levels but some regions lagging 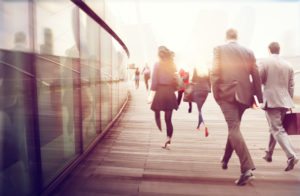 Job vacancies have reached their highest level since the start of the first lockdown, although some areas are lagging behind, a study has indicated.

A survey by the Recruitment and Employment Confederation (REC) said there were 1.36 million job adverts across the UK in the first week of November, the largest number since early March and the start of the coronavirus pandemic.

However, the research shows the recovery from the COVID-19 crisis has not been evenly distributed across the different regions and sectors of the labour market.

Half of the UK’s major regions now have higher numbers of job adverts than in March, while some still have fewer.

The bounce back has been led by the north-west England and Wales, which last month respectively had 37% and 33% more vacancies than in March, but London is lagging behind with 18.7% fewer posts on offer.

The study also shows roles in construction, logistics and food and drink have recovered strongly, while hospitality and leisure remain at significantly lower levels than in March.

Job postings for care workers remained at a relatively stable level from March to October, due to heightened demand for staff in residential homes.

In October, the number of adverts for nurses had risen to 39% above the March level, ahead of the winter period.

Please use Chrome browser for a more accessible video player

However, at the other end of the spectrum, there were 48.7% fewer adverts for bar staff than in March, despite a recovery during the summer months.

Vacancies for chefs were down by 46% and for fitness instructors by 37% – significantly lower than before the pandemic hit.

The latest jobs snapshot comes after official figures showed the UK economy grew by a record 15.5% in the third quarter, but the pace had slowed raising expectations that gross domestic product (GDP) will go into reverse again.

Data also revealed a record 314,000 redundancies were seen in the three months to September as the coronavirus took a further toll on jobs.

The unemployment rate rose to 4.8%, its highest level since November 2016, according to the Office for National Statistics (ONS).

REC chief executive Neil Carberry said: “Unemployment and redundancy numbers earlier this week showed that this is a tough moment for our jobs market, but we also know that there are always jobs being created and as this data reveals, there is hope to be found in many places and sectors.

“What we need to do now is support businesses who can create jobs, and help people who have lost work to transition into those new roles.

“With the stark difference in demand across different regions, avoiding a skills mismatch will require serious planning.

“Government can help by reducing barriers to creating jobs through tax policy and regulatory change – like keeping the online right-to-work checking we have moved to in the pandemic.”

City of London suffers £2.3 trillion loss of trade due to Brexit in a...

The City of London suffered a loss